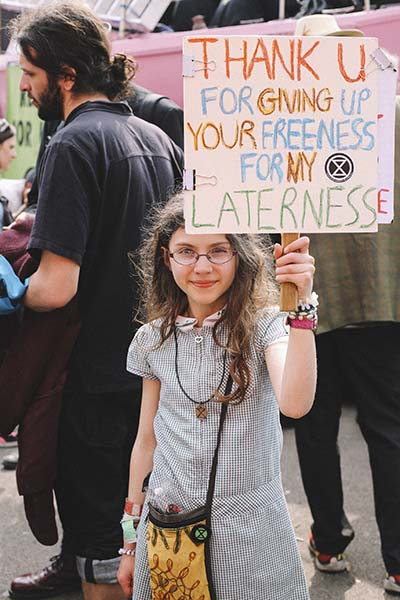 In mid-April I was in the UK at an amazing and bewildering moment. No, I’m not talking about the here-again-gone-again Brexit deadline; I’m talking about the far more important arrival of Climate Change onto the center stage of British public discourse.

I was watching the Extinction Rebellion protests in London on TV news, watching David Attenborough’s brilliant polemic against inaction over climate change on the BBC, watching Greta Thunberg’s unanswerable challenges to the European Parliament and the UK political class; and I was preparing to fly a third of the way around the world on my way back to Bali, preparing to pump 2 tons of CO2 into the atmosphere in one fell swoop. The juxtaposition was heartbreaking. I felt compelled to be with the Extinction Rebellion in London; I was planning to pass under their Leicester Square protest on my way to Heathrow airport.

My justification for not getting off the Underground and going upstairs was that it would be too difficult to protest with my suitcase and carry-on bag in tow. Nevertheless, I felt I was betraying my conscience. I struggled greatly with what to do, but realized that what I really hoped for from joining the action was a galvanizing of my own actions to reduce my carbon footprint. So, if I wasn’t going to the protest, I’d have to motivate myself anyway.

The first of the Extinction Rebellion’s three demands is a carbon zero economy by 2025. Whilst the science says this is entirely necessary, and the technologies to make a good go of it are already available, the politics seems to indicate it is impossibly idealistic. Well, I wouldn’t be doing what I am doing with Threads of Life without being both an idealist and an optimist. Gandhi said “Be the change you want to see”, so my challenge is to make my life and business carbon zero by 2025.

Can this be done? Can it be done here in Indonesia? Should I wait until the politicians change the policy framework and start a Green New Deal or Green Industrial Revolution? Is there any point if the majority does nothing? All these questions and more rattled around in my head during the long flight back to Bali.

On my first night back here, and still in the grips of jet lag, I had the opportunity to meet one of my heroes, Satish Kumar, who is founder of the Schumacher College, editor of Resurgence magazine, and author Soil, Soul, Society (which I read on the plane). I told him about the inner conflict between my recognition of my climate impact and my climate inaction, and he said, “Do what you can, where you are. Plant seeds now, and take care of them, and they will become mighty trees spreading their own seeds.”

Threads of Life’s homepage talks about helping indigenous weavers to manage their natural resources sustainably, and over the past two decades we have had a positive impact in this arena, but there is a lot more to do before we can talk about being sustainable as an organization. My first non-exhaustive list of things to address is: electricity use, aviation fuel used in flying, LPG used in the dye studio and at home, petrol used in cars, cement used in construction. There is also the embodied energy in (that is the carbon footprint of the production processes for) all the stuff we live with and use.

I will report in future blog posts how we are getting on with this endeavour.