We live in a world that knows no boundaries. But for the indigenous people of Indonesia, boundaries are always potent invitations to see ourselves in new ways and change the ways we relate to the human and more-than-human world. Where the textile arts remain vital, they are among the primary expressions of this worldview.

Much has been written about how the Coronavirus moved from where it was endemic among animal populations to where it is now pandemic among us because we overstepped the bounds between humanity and the forests, and because our globalised travel habits ignored ecosystem boundaries. Now that limits are being placed on what we can do, we chafe against these boundaries.

Boundaries are not seen in this way by all peoples. In indigenous Indonesia, boundaries of all kinds are seen to demark realms of different behaviour. The stories and myths of oral traditions, along with the designs employed in material culture, remind people of the etiquette to follow towards the aspects of human and more-than-human society that we encounter when crossing and having crossed a particular boundary. As a ubiquitous aspect of material culture, the textile arts play a central role in this process of reminding. 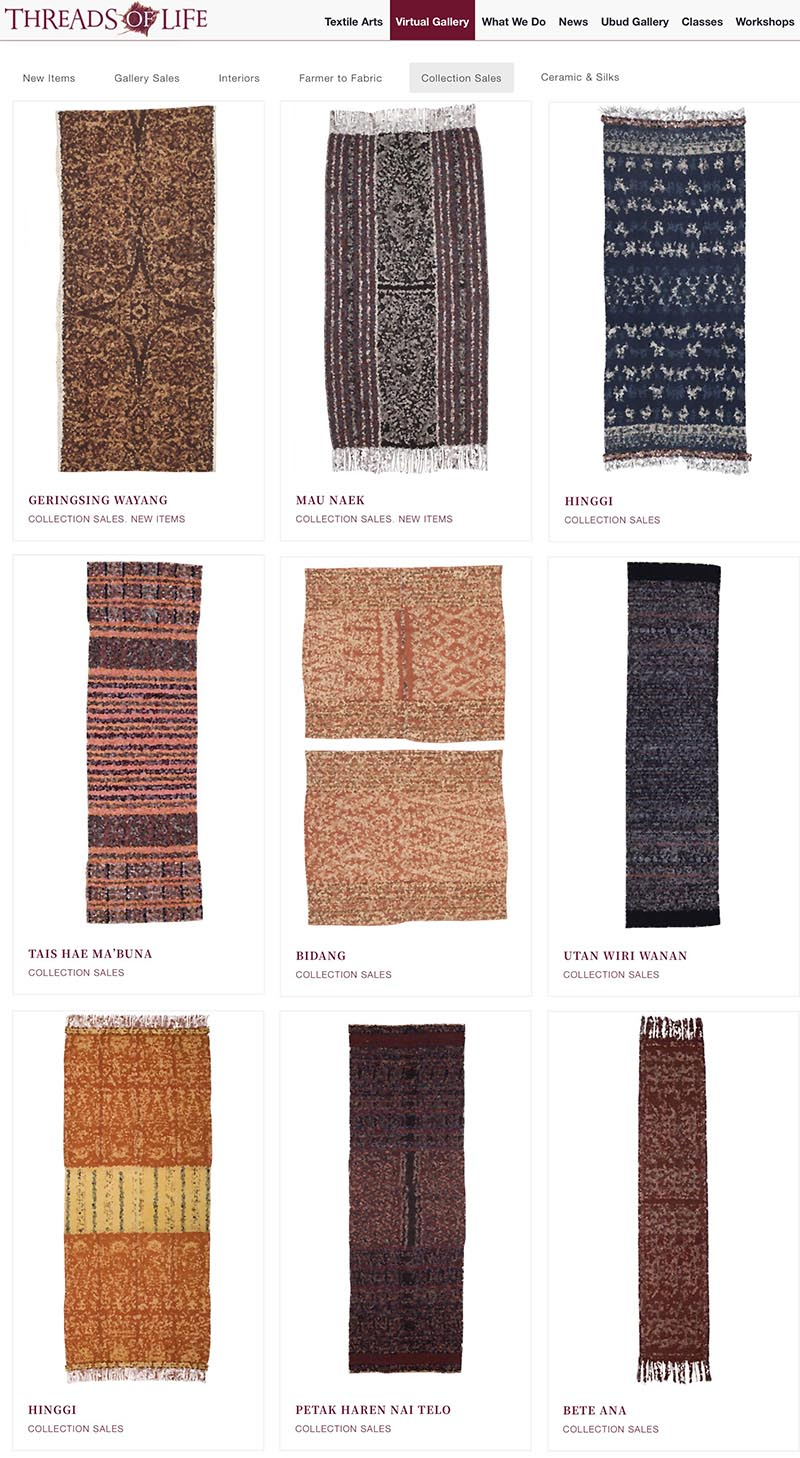 When we first look at an Indonesian indigenous textile, we are often drawn to the intricacy of the motifs and ask, “What do these symbols mean?” While there is often meaning behind these symbols, a focus on the motifs can mislead as it is the visual structure of fields and registers into which the motifs are placed on the textile that is often more meaningful. When we pixilate the images of group of textiles from the online gallery, the definition of the motifs disappears and the boundaries of the underlying structures becomes apparent.

The two Hinggi textiles from Sumba show a centre field bounded above and below by identical reflecting registers of repeating motifs. The Mau Naek and the Tais Hae Ma’buna, both from Timor, display the strong bands of colour that structure Timorese cloths. (Note that the Mau Naek would be worn by a man as a hip cloth, so the bands would be horizontal as in the woman’s Tais.) From eastern Flores and neighbouring Lembata islands, the Utan Wiri Wanana and Petak Haren Nai Telo, are characterised by numerous horizontal bands.

The last three pieces, though from very different places, display another feature. For the Geringsing Wayang from Bali, the Bidang from Kalimantan, and the Bete Ana from Timor, a wide field with a large motif is contained within strong borders. This is clearest on the Bidang, but the Bete Ana has red borders running end-to-end along the sides of the cloth, while the Geringsing Wayang has striking white selvedges.

If we were to search, we would find these same structures that are visible in the textiles of a particular tradition in other aspects of its material culture. There might be a direct correspondence within the vernacular architecture or traditional basketry. The rhythms of the textile’s visual structures might echo aspects of social organisation and ritual cycles. Names associated with the parts of the textile’s visual structure might be associated with ancestral mythology.

The Hinggi textiles most explicitly exemplify this. The visual registers of the cloth mirror the structure of a traditional house, with the ridge beam at the apex of the roof and the loft space below corresponding to the centre field, with the living space under that, and the steps down to the ground, and the space under the house relating to the other fields of the textile design. Further analogues are to be found in the layout of the village itself, the place of the village within the watershed between the mountains and the sea, and ultimately in the Sumbanese cosmology with its ancestral domains, its physical world, and its underworld. When crossing any of these boundaries, there is etiquette for how to behave towards the people, plants, animals, and ancestors you may encounter.

All of our field staff can relate to the importance of respecting such boundaries and have stories of what happened when they did not show proper respect.

For myself, a lesson came when first visiting the forest community in Flores that I wrote about in an April 2020 blog post. The village was important to us as a potential supplier of Symplocos cochinchinensis, which is the plant mordant all the weavers we work with use in their red dye processes. We were making a short visit to the village in preparation for a week-long stay to help the community map the forest’s Symplocos population and form harvesting groups for the fallen leaves.

We approached the village by car on the steep mountain road, and as soon as we neared our destination I started to feel feverish and dizzy. I spent most of the visit laying on a woven mat in the corner of the room. I was worried about what I might be coming down with, but as soon as we had passed the same spot in the forest on the way out, I quickly recovered. From the subsequent mapping work, I learned that the place where I became sick and then recovered, was at the old village boundary. Overgrown in the bushes beside the road were the subsided remains of an old stone monument formed by a flat rock laid table-like atop four small rock pillars. When I first asked whether there was still an ancestral guardian at the monument, the answer was, “Of course!” Since then, as we approach and pass that place on the way in, I always say a silent prayer to the ancestors asking permission to enter and giving notice of our intentions; on the way out I give notice of departure and ask that all whom we leave behind be safeguarded until our next visit.

It is by such means that the more-than-human community communicates with us. If we are paying attention, the messages need not be so blunt and blatant. A feeling or the rightness of one course of action and the inappropriateness of another may be all there is. When these intuitions contradict logic, or our pre-existing plans, or our desired outcomes, it is always worth spending time to ponder whether there is more to the situation than we consciously know. For the people we work with, this would not be to act out of superstition. Rather, where mind is not understood to be separate from the natural world, and the self is experienced as porous to the world around itself, this is the ancestral mind speaking through the embodied self.